​Some example layouts showing how the four switch sections might be used operationally. In each case, sections of the layout (colour coded) are isolated from each other, and power is routed to them through the sector switches. This allows each section to be independently allocated to controller I or controller II. (The layout designs were drawn up using Rail Modeller Pro.) 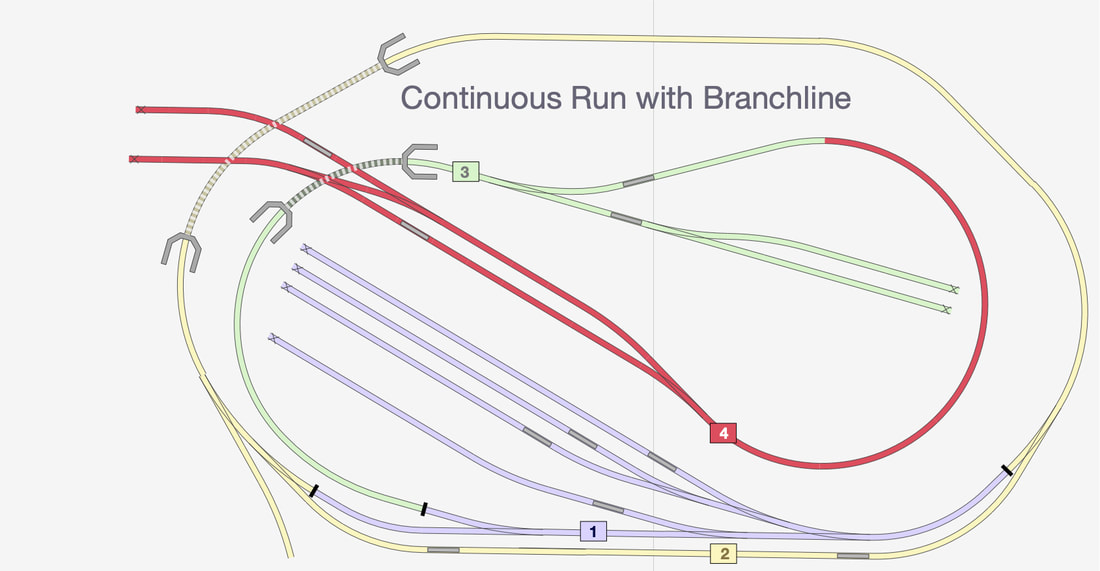 Track plan adapted from "The Virginian" by David Popp of Model Railroader Magazine
​In Layout 1, the main line is controlled by switch 2. The yard is controlled by switch 1. This allows one engine to shunt the yard, while another train does laps around the layout. By setting switches 1 and 2 to be the same controller, a train can be driven from the main line into the loop, and reversed into the yard. Similarly, switch 3 controls the lower part of the branch, allowing an engine to shunt the industrial sidings (or perhaps a mine), while switch 4 controls the upper branch and terminus station.

Layout 2 shows a simplified end-to-end layout. Each terminus is shown as just two sidings, but you can make them as complicated as you want. There are four sections, 1 through 4 from left to right, and each section can be allocated to one of two controls on your Duo, or a section can be isolated. It's assumed that the points/turnouts are isolating as well.

Let's say we have three trains: a green train at the left terminus, and a red and blue train at the right terminus. The blue train is destined for the bay platform at the intermediate station.

This allows us to drive the green train to the intermediate station at the same time as the blue train drives to the bay platform at the same station.

​If we then set all switches to controller II (yellow route), we can drive the red train direct from the right terminus, through the intermediate station to the left terminus.

Using one Duo controller, you can have continuous operation on an end-to-end layout.

Layout 3 is based on an example N-scale layout design at the Kato Hobby Center in Tokyo. It features a main line that transitions to a single track section (with passing loop) and back to a double track section. With appropriate signalling and a Duo controller, a lot of fun can be had having multiple trains working their way around the layout.

Layout 4 is Cyril Freezer's classic Minories​ design for a city terminus. Many people have built versions of Minories, and you can see one example here https://thrumlington.blogspot.com/2015/06/great-moor-street-minories.html. The above track plan is colour coded for use with a Duo and its four sector switches. Adding an additional Switch Bank would allow the layout to be broken up into even more sections.